When You Need to Know: Manhattan Neighborhood Links

Part of 's charm is the distinct character of each neighborhood, from Murray Hill to , Little Italy to Lenox Hill. Check in here for neighborhood guides and info; I’ll periodically update these links to keep you informed.

Spotlight on : A Walking Tour 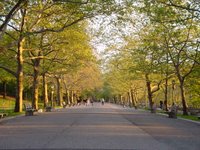 – so named because it sits atop a 135-foot bluff - is a genteel neighborhood just above 's . Flanked by three of the city's finest parks, and home and The Cathedral of St. John the Divine, it lends itself to meandering and taking your time. Get to know the people and places of on this walking tour.

Spotlight on Midtown: One Night at the Plaza

An anchor on the northern edge of Midtown, the Plaza Hotel was the Grande Dame of New York luxury hotels. Established in 1907, its rooms overlooking , its French Chateau architecture, and its famed interiors such as the , the Grand Ballroom and the Oak Room and Oak Bar made the Plaza a icon. Sadly, the hotel closed its doors on , for a conversion to private residences.

Greenmarkets: A Guide to Farmer's Markets in NYC

You probably already know about the popular Union Square Greenmarket (or Farmer's Market, as it's often called). But did you know hosts 18 other Greenmarkets throughout the city on different days of the week? While some are seasonal, 11 are open year-round. Use this map to find a Greenmarket in your neighborhood. NOTE: Adobe Acrobat Reader required. For more information on the city’s Greenmarket program, CLICK HERE. NYC's Architectural Gems by Neighborhood
Tom Fletcher, a New York architect (by way of Australia), maintains this online library of photographs and notes about an eclectic range of the city's most architecturally interesting buildings; it's conveniently organized by neighborhood.

Best Neighborhoods for Inline Skating
This handy neighborhood guide to best places for inline skating is thoughtfully written for the novice as well as experienced skater, noting such details as how the trees hanging over the sidewalks of Riverside Park make the ground "twiggy." Get the full rundown on all the best locales around .

Manhattan Restaurants by Neighborhood
When you need a restaurant in a specific neighborhood, use this link to get New York Magazine’s listing of 1,861 restaurants sorted by location – from Battery Park City to the (neighborhoods are sorted in alphabetical order). You can resort the list by cuisine, price range or restaurant name. Reviews are included, too.

Magazine Neighborhood Guides
The glossy’s Web site offers a number of handy neighborhood guides with detailed maps and write-ups on local shops, restaurants and attractions. Check them out before you head out.

Plug your address into this interactive NYC Map Portal, and you can spend hours getting detailed information on your neighborhood, from the breakdown of your various districts (community, city council, school, etc.), census data and local services to a host of statistics such as crime rates, number of noise complaints and more.

This color-coded map demarcates where one neighborhood ends and the next begins, from Inwood to the Financial District.

City of : The NYC Department of City Planning Interactive Neighborhood Map
This map breaks the five boroughs down into their 59 official Community Districts. Click on any one to get a detailed view of the district, including niche neighborhoods (e.g., you’ll see not just the , but Carnegie Hill). Or, use the pull-down menu to select a specific neighborhood to view. You can also use this site to obtain information on proposed city planning projects, such as the city’s recommendations for the development of the site and the High Line development plan in .

Timeformations: The NYC Skyline in 3D 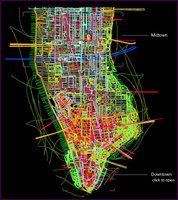 Watch this interactive computer animation reveal the development of the downtown skyline, neighborhood-by-neighborhood and era-by-era. First click on an area (e.g., downtown), then click through the time periods and major developments, and watch the city take shape – literally. HINT: A brief tutorial precedes the animation; just click through each of the links to arrive at the interactive map. For more information about the Manhattan Timeformations project and its developers, CLICK HERE.

The Oldest Known Map of (1639)
For a look at Manhattan long before the skyscrapers, check out this 1639 map, dotted with tiny farms, plantations and four Native American villages in what is now Brooklyn.